I've mentioned it a couple of times before and anyone who has read some of my previous posts on Star Trek might know by now that The Next Generation is far from my favorite Star Trek series. In fact, in many ways I would probably put it at the bottom of my list (the verdict is still out on Discovery). That doesn't mean I think it's a bad series though, just that it is facing stiff competition. When comparing it to the other series in the Star Trek universe, TNG definitely has a lot going for it, but it has even more that just rubs me the wrong way. Mainly I find most of the supporting characters to be annoyingly... lacking of substance. They're just walking caricatures to me, and you could probably say that about all of the Star Trek series really, but in TNG they don't even come off as likable. 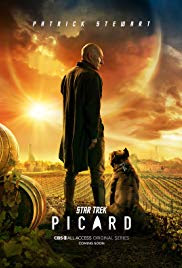 That is, except for Picard and Data. Those two carry TNG if you ask me and without them there would be no reason to watch that series at all. They alone do make it worth suffering through however, though I do recommend simply skipping the episodes that focus on some of the worst characters (Riker, the Crushers, Troi, Worf... wait I am just naming the entire cast ain't I?).

So when Star Trek Picard was announced (though at first it was only known as something Star Trek with the character Picard in it) I wasn't really sure what to think of it. I'm not against more Star Trek, although like I said I am not really sure what I feel about Discovery yet. And I like Picard as a character, he is great. So whether this new series would be worth checking out or not would really come down to how much it was about Picard and how much it would be fan servicing all the other characters in there as well. I definitely didn't feel like I needed to see more of them, especially since some of them do plenty of cameos on other Star Trek series already, unlike Picard and beforementioned Data.

We'll fast forward a couple of months and I have watched the first episode of Star Trek Picard and I can say, yeah. This has potential. This could actually turn out to be something I am really going to enjoy.


It starts out with Picard in a dream sequence, though at first that's not entirely clear. Picard is sitting on a space ship playing chess with Data, but things quickly seem to feel a bit off. The very first sequence into this scene is overlaid with Bing Crosby singing, and I can't hear Bing Crosby without immediately thinking of everything Fallout.

The dream sequence turns into a nightmare and we see Picard waking up in his bed at some sort of vineyard mansion. When he looks out the window at the rows of crops it looks like it's the middle of the day, so does he sleep that long or did he just have a nap?

We also learn that Picard's dog is named, or at least called, Number One. Funny I guess, but cropped ears? Really? All those years into enlightenment and peaceful living but they still do that completely unnecessary and cruel cutting of ears? It seems like such an odd anachronistic thing to accidentally leave in, it makes me kind of sad that it's so natural to the show runners that they didn't even thing there was anything odd about it (cropping of dog ears and tails is thankfully illegal in Sweden).

Apparently Picard lives with Romulans at this vineyard and he is about to hold an interview with a TV network (or whatever they have that far in the future) who wants to ask them about the incident that made Picard retire.

I can't say I am well versed in TNG and Picard lore, so I actually have no idea if this was something that was known prior to this show or created for this show. My shoot-from-the-hip guess is that it was entirely, or at least mostly, created for the show. This part is very exposition heavy, and the interviewer is so bad at her job it is clear it was only written this way so that us viewers will quickly get up to date with where and why Picard is in his life.

I think it works in the sense that they make a whole lot of background story delivered in a short space of time understandable and easy to follow. This exposition also does its job in helping us understand a lot of the things that are about to follow.


In short, the Romulan home-world was about to explode (some 20 ish years ago in this series) and Picard was part of the few people who wanted to help the Romulans out, seeing as they are snarky and aggressive and have been the enemy of the Federation for a long time. They're simply not very nice people. Picard manages to rally enough support for his cause to get a rescue mission going, but everything is ruined when a group of "synth's" (short for synthetics i.e androids) decide to go rogue and abuse the situation by blowing up a lot of people. Synthetics are subsequently banned from existing within the Federation, something that Picard is very much against seeing as one of his best friends was a synthetic (i.e Data). Data had died somewhere around this time by sacrificing himself to save Picards life so isn't around anymore as I understood it, though it's not mentioned exactly how this happens.

Picard retires from the Federation in anger and spends the rest of his days at his vineyard. Until something happens.

What happens is a girl named Dahj. We get a scene where she is having a date with her boyfriend when suddenly loads of SWAT-looking people show up, instantly murder he boyfriend and go to kidnap her. Dahj "activates" in some way and kills them all with some pretty kickass fighting (which immediately made me think of Clarissa Mao from The Expanse). Seeming as confused about this as the rest of us, she gets a vision/memory of Picard in her head and since he is somewhat of a notability she knows where to find him and decides to do so.

When Dahj turns up at Picards vineyard my brain started screaming "BLADE RUNNER!". Rogue synthetics? A synthetic that doesn't know it's a synthetic (Dahj)? A human who has to go looking for them? Any of this sound very familiar?


I am a huge fan of Blade Runner so I would never turn down something that has taken inspiration from it. Also I think that just because Blade Runner has explored this concept before doesn't mean you should shy away from it, it's a great concept after all. In fact I would applaud the show creators if this is the direction they want to take this show in, I am all for that. But I don't know that yet.
Dahj presents herself to Picard who starts to suspect that she is a synthetic. She leaves before he can ask her more and he has a hunch he decides to go look up. In a vault he has a painting made by Data 30 years prior called "Daughter" and it is the image of Dahj on it. So Data is involved too somehow. It doesn't help that Picard keeps dreaming and daydreaming about Data as well.

It turns out Dahj left because she was worried Picard would get hurt. Don't worry, Dahj's mom (or whatever she can be) deus-ex-machinas Dahj back to Picard where Picard can tell her about the discovery of the painting. Then the SWAT-people find them and they get chased down, Dahj fights them off for a while but they manage to kill her.

This actually threw me off. I was sure Dahj was going to be part of this story and killing her off this soon deepened the mystery in a great way for me.

Picard decides to investigate further at the Daystrom Institute, which apparently has the most knowledge of synthethics though they're actually banned. He talks with a woman there who looks like she is at most 30 but she talks about synthetics and their history like she's been part of it for the last 40 years. They couldn't find an actor who looked like she had been around for all that time then?
Picard finds out that synthetics that are entirely organic might exist and they were always created in pairs. Why you're probably wondering? Very good question that this episode at least doesn't answer, though I am very sure the answer is nothing more than "plot reasons".

Anyway, this means that Dahj's twin is out there somewhere and Picard is setting out to find her somehow.

Before the episode ends we get to see this twin, named Soji (if I recall correctly), on board what looks like a repurposed Borg Cube full of Romulans. Also, did they create a Romulan language for this show or did it exist already?


This episode was definitely too short. Aren't pilot episodes supposed to be double-length anyway? It got me interested almost immediately anyway and although some of the writing is a bit sloppy and convenient, Picard (Patrick Stewart that is) and the promise of stories about androids make it come to life for me. Would I love it half as much if Stewart wasn't in it to sell it so well? No, probably not but he is so here we are. This has so much potential to become something great I feel, if they manage to keep the same sense of urgency and mystery throughout.

Some of the critique seems to be that the pacing is too slow. While I haven't seen far enough to judge for myself yet, but my spontaneous reaction is hell yes! Finally a TV-show that has the guts to take its time and not just whizz past my face.

Are these synthetics creations of Data's? Who is hunting them? Is Data still out there? Where is Seven of Nine? These are all questions I want answers to and I am really looking forward to the next episode.