"The human adventure is just beginning". 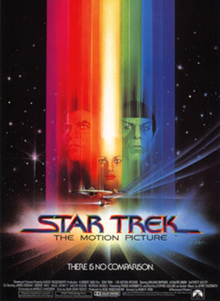 Let me get one thing out of the way right from the start - I think this movie is absolutely epic and anyone who thinks otherwise can go hug a cactus.

I've spent the last half hour reading through reviews of this movie, trying to figure out why it only has a 42% Rotten Tomato score and a 6,4 average on IMDB. While none of those scores are awful, I don't feel they reflect the quality of this movie. It is clear that viewers seem to fall somewhere on either side of the fence - either you enjoy the slow pacing of the movie, or you don't. Yes, 2001 - A Space Odyssey had already presented us to this ponderous style of slowly floating around in each scene over a decade before, but does that mean we never want to see it again? Does it mean that this movie doesn't also do it well? No and no!

At the time when the movie was made, the final episode of The Original Series was also a decade old. The creators of the show had an opportunity not only to revisit the beloved series, but finally with a budget and apparently free hands to truly bring the vision of Star Trek to life. This doesn't feel like a long episode of the Tv series, this definitely feels like a Motion Picture with a scope and craftsmanship that single episodes just didn't have back then. Some people say this doesn't feel like Star Trek. I say this feels exactly like Star Trek. To me it is clear that this is the core of the series, without the need to throw in things that explode or die in fancy ways to keep a TV audience interested and returning. This is about the mystery, vastness, emptiness and sheer marvel of space in all its magnitude. And dang if this movie does not capture all of those concepts brilliantly.


The movie starts out by introducing the enemy - a massive cloud of epic proportions, literally, as it spans over 2 AU. It quickly and effortlessly destroys three Klingon Birds of Prey before it continues on its course towards Earth. Enterprise, which has just been almost completely refitted and is commandeered by its new captain Decker, turns out to be the only starship close enough to intercept the cloud before it reaches its presumed goal. What it wants, is or comes from no one knows. It is up to the crew of the Enterprise to solve all of these riddles before it is too late. While both Kirk and Spock have departed the Enterprise since the ending of TOS, the plot gets them back on the ship before long, where they both resume their old positions as captain and science officer respectively.

What follows is a movie that revels in its exterior shots and space models and gives each scene exactly the amount of time it needs to allow for the full impact of the atmosphere and setting it is trying to sell. Yes, the scenes are long, but we want to see this. For every long shot of some model or part of space I am as awestruck and gleeful as Kirk when he first sets eyes on the Enterprise again, it is all so beautiful. Each scene feels carefully and lovingly crafted, you see people doing things in the background that you might not even notice but that you know must've taken them a lot of effort to prepare. The soundscapes are just spot on. The music and especially the sound effect used for the cloud are great. They are really trying to sell this world, and they are succeeding. The editing is so careful that in the end you have the feeling the entire movie was just one long scene from beginning to end. This is as far from the modern day Hollywood style of giving you sixteen scene cuts over ten seconds as you can come. And I love it all the more for it.


One of the first things I thought when I finished watching is that this movie would've made an absolutely amazing science-fiction novel. The story is similar to that of Rendezvous with Rama by Arthur C Clarke or Nemesis by Isaac Asimov. While you could argue that it's just borrowing ideas, I instead find that it gives these ideas one of the best movie representations there are out there. The initial looming threat of the cloud, with its immense power and incomprehensible existence would have made HP Lovecraft proud. The movie builds up the tension very much in the way of the old horror author. But then, before things go into the weird, it shows itself as the science fiction story it is. We start getting clues as to how the cloud functions and what it might be after. In the end, in true Star Trek fashion, humanity turns out to be the key to saving Earth yet again.

The final plot twist in the end had my mind absolutely blown the first time I watched this movie. Not only is it impossible to guess, the idea that one of our own space probes could come back after having encountered alien life is actually a really cool one that I would love to see further explored. In the movie they find out that the cloud, V'ger as it is called, turns out to be the Voyager 6 (which doesn't actually exist), sent from Earth over 300 years ago. Somewhere out in space it encounters a life form entirely made up of machines, which rebuilds the probe and sends it back to allow for it to complete its programming - to send its collected data back to Earth. Voyager, or V'ger as it eventually calls itself, forgets what it is or where it's from however and initially thinks the humans are "infesting" the planet Earth, preventing it from interacting with its original creators. Kirk et al manages to convince it otherwise by allowing a human (Decker) to merge with the machine, before it destroys life on Earth.


While I think this movie is a pure joy to watch, I do have a few issues with it. My biggest one is probably with the costume design, because whatever they're all supposed to be wearing both looks ugly and uncomfortable (Nichelle Nichols apparently also had issues with it). What even is that thing they have on their stomachs? Is that a belt buckle or some sort of fanny pack? My second issue is with the plot point that the Enterprise is the only starship within interception range, which sounds forced and implausible to me.

And, here is one where I can see where the "haters" are coming from - most of the characters feel grossly underutilized. Except for Kirk getting to shortly explore what it feels like to possibly be "too old" for the captain's chair that he still covets, most of the other characters barely get any limelight. Interestingly enough, the ones that the story seems to focus the most on are the two new characters of Ilia and Decker, who (spoiler alert again) also die at the end. I can understand why fans get the feeling that this wasn't written as a Star Trek story with the old Enterprise crew in mind. While we get to see some of Spock trying to do the Kolinahr (hilarous scene also where Bones calls it "the culinary course"); an underexplored bit of the reunion of Kirk, Spock and Bones; and Scotty tinkering with the Enterprise warp drive, the interactions between the core group are basically gone. Spock almost seems like he's a bit confused at the whole thing and doesn't know what to do. He says he is there to "get an answer", but to what? No one asks him, for some reason, and it is barely developed. Kirk is clearly the one having the most fun with the movie and is as usual acting the heck out of each scene he is in. Characters like Chekov, Sulu and Uhura are almost completely replacable with non-descript ones. This is apparently an issue that many of the main actors pointed out, but few changes were made.

In this sense I can understand why fans feel like they've peeled away too much of what made the TV-series Star Trek, but to me the end result is still so exceedingly beautiful and awe-inspiring, I can't help but love it all the same.


The ending is also the sort of non-committing that I know can annoy some people. While we get to see Decker merge with V'Ger, we know nothing of the end result or what becomes of it. I don't have an issue with it though, since this is how many science fiction writers end their stories. They might be great at coming up with concepts, but notoriously bad at wrapping them up into a satisfying ending. Even more hilariously, right after Earth seems to be saved, Kirk literally just waves his hand at the "viewer" and tells Sulu to fly "out there, somewhere". The ending is probably meant to come off as sentimental and adventurous but feels more stupid. Surely he can't just take the Enterprise out into space without any mission or orders like that? He is basically kidnapping the entire crew and ship.

I guess Walter Koenig said it best when he described it as "a Star Trek movie, but not the old Star Trek". Maybe whether you're going to enjoy this comes down to if you're after more Kirk + Spock & gang or you're ok with "just" a really well crafted, interestingly told science fiction story that happens to take place in the Star Trek universe. Even if you don't normally enjoy Star Trek, you'll enjoy this as a movie that will give you a whole lot of great sci-fi ideas in some really cool visuals. Personally, although I am a fan of the Original Series, I am not overly sentimental about it and was perfectly ok with the secondary role most of the characters got in this movie, when the rest of it is so enticing. It just looks and sounds so good, with a story that really captures your imagination, I definitely recommend it whole-heartedly to any sci-fi fan out there. I'd rewatch this over 2001 - A Space Odyssey any day. 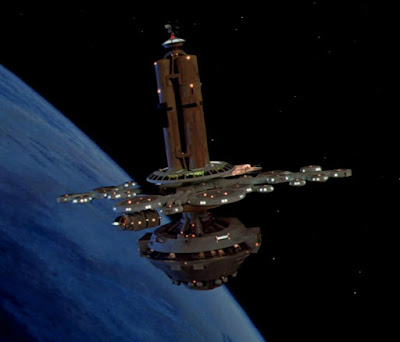 Here are some off the cuff thoughts that were spurred while watching this movie;
When they realize V'ger is in fact Voyager 6, Decker mentions that the Voyager 6 was lost to "what they used to call a black hole". "Used to call" implies that they think that black holes will eventually (in the future that is Star Trek) turn out to be something else, but as far as I know this isn't something that has been explored further within the Star Trek Universe? Please correct me if I am wrong!
V'ger has supposedly encountered a machine life form that seems to have immense technological abilities. Wouldn't it have been cool to make a throwback episode referencing this movie in one of the series that take place in the future of the Original Series, like Voyager or Next Generation? I would've loved for them to further explore this civilization of machines, but yet again I don't think this is ever done (there is a Voyager episode of robots at war that are the only surviving ones of that species, but I can't think of any other similar ones).