This review contains spoilers for this 24 year old game, so beware.

Albion is the kind of game I wish I had come across 20 years ago, when life was... more full of time. I so wish I had the skill and patience for it because I know I could enjoy it greatly if I gave it the proper amount of love. There is a lot to like here, but it's buried under gameplay that doesn't jive with me anymore.

Albion, released in 1995 to MS-DOS and not to be confused with some other game named Albion Online, is a role playing game developed by Blue Byte. The German video game company Blue Byte are maybe mostly know for their Settlers series, at least by me but Albion and the Settlers couldn't be more different.


The game takes place a couple of hundred years into the future and seems to be a pure science fiction game at first. In it you play as space ship pilot Tom Driscoll who is sent out on an expedition to scout out resources for his home ship. He and his co-pilot end up crashing on the planet which, contrary to reports, turns out to be inhabited. And not by any kind of life, but advanced and intelligent humanoid cat-people called Iskai.

The Iskai rescue you from your wreckage and you're quickly thrown into a plot where an important Iskai is murdered, you being outsiders are the first to be suspected, and the only way for you to get out of the mess is to uncover who the real murderer is. This is only an excuse to get the story going however, giving you both means and motivation to travel around and discover more about the Iskai race and their planet.

You'll quickly find that there is quite a lot to see and explore on Albion. The Iskai and their planet really feel well fleshed out and thought through, it is a world you want to know more about and definitely save from the threat of exploitation that looms from your home ship.

Visually and audibly the game sells its ideas too. While the audio can get a bit repetitive, this is 1995 after all, the visuals are colourful and bright and lovely to look at. Most of the time you have an idea of what you're looking at and when you don't it's not because of bad design but because it's alien to you.

Initially the game plays out with a top-down perspective, and you can choose to control your character (at least in my GoG version) either with the arrow keys or by dragging the mouse. Personally I found that the arrow keys worked a lot better since it ended up controlling more accurately. At the very beginning, when you're still on the space ship and preparing for your trip you play alone but it won't take long before you get party members and you can choose to control either one of them. 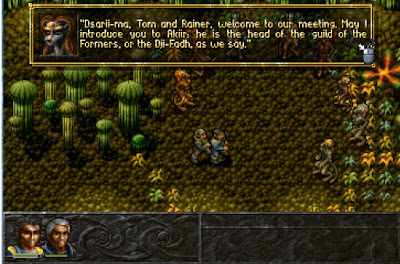 Soon you'll discover that instanced areas, such as cities and dungeons (but not the space ship for some reason), use a first person perspective similar to Doom. At first this confused me and it took me quite some time to get used to controlling myself this way. While eventually you get used to it I would've much preferred it if they had just kept the top-down view throughout the game. The first-person perspective makes it so easy to lose track of where you are, you have much less overview of your surroundings and I spent a lot of time just feeling lost. It is fortunate that there is a convenient map to use that allows you to see which direction you're moving, because you're going to need it a lot.

I am not sure what the thought process was behind the first person perspective areas, maybe they wanted you to have a more immersive experience. While it's not horrible I really do think the game would've been much better without this style. The first Iskai city you come to is pretty large, with many different shops and guilds worth visiting and I spent way too much time just trying to find my bearings.


Combat plays out in yet another fashion, in which you're moved into a grid-like area where you move your characters on the fighting field like on a chess board. You can choose to do a number of actions each turn and there is both melee, ranged and magic combat in this game. Combat is pretty straight forward with your character swinging (shooting) away at the enemies as you command them. Some things are more obscure, like the fact that you can use items during combat. It's easily missed but on the other hand once you realize this it makes the whole combat experience one that works well enough.

You will be bad at it to begin with though and this is where one of the bigger flaws of the game becomes clear. Being designed according to the older school of "git gud", it is very easy to not only venture into areas that are well above your ability grade, but also to completely miss areas and items that are essentially crucial for your continued existence.

While the story is well paced and I rarely found myself stuck as to what I had to do next, it is too easy to miss things that are really helpful in your endeavours. Just after I had crashed on the planet and I found the first dungeon I just kept dying to some mobs that I found in there, also the first enemies I had even encountered and fought in the game. At first and for some time I felt really frustrated. How could the game already be so difficult that I didn't feel like I had a chance against the very first enemies of the game? Had I missed something?


Turns out, I had. First of all, apparently there was an entire area on the space ship that I could've gone to, which would've awarded me a very useful weapon even before I crash on the planet. But it is entirely possible, even stressed, to just continue with the story. At no point is there a hint or indication that there are other areas to check out in the space ship. The only way you'd find it is by ignoring the call to go to your launch and wander around exploring.

Usually I would enjoy gameplay that rewards curiosity, but in this instance it was too well hidden and I only ended up feeling snubbed of something I really needed.

Secondly, as I end up looking at a walkthrough I find out that these first enemies are optional, but it's definitely not something that is particularly clear. As you move through the dungeon there is a possibility to trigger a cave down that traps you with the enemies, it happens if you just move through the dungeon normally as one would do. What you're supposed to do though, especially if you're nowhere near ready to fight the enemies (which you don't know yet since it's your first combat), is to avoid triggering the cave down and not venture further into the cave.

Realizing at this point, some hour into it, that the game had already tricked me twice I felt a bit annoyed. There is definitely a fine balance that needs to be struck between rewarding curious players, and punishing the not so smart ones (like me). In Final Fantasy VII it is possible to find a lot of secrets that are cool and useful to you. But they don't just require you to be lucky enough to find them, for almost every one of them there is some component of extreme farming or skill involved to acquire these rewards. Furthermore, the game is entirely possible to beat without too much trouble even if you never find a single one of these secrets.


In Albion however you realize that you missed a really important item just because you happened to not take the right turn at some point, and there is no going back for it either. You didn't just miss out on a fun item, you've missed out on something that makes a huge difference to your gameplay.

It is also too easy to stumble into areas that are way above your capabilities and there is little way to know if you're just doing something wrong or should head in another direction. Mostly it turned out I just really needed to farm for more skill and levels.

When it's so easy to get lost, die and have to start over it makes it all the more annoying when you know you've missed some item that could've made it so much easier for you. It makes me feel like a bad player, and that is pretty much the opposite of fun.


Which is unfortunate, because I really do feel like so much about this game is great. There is literally a whole world waiting for you to be explored. A world filled with interesting characters and places to meet and see. There is a story that, at least for as far as I got, has a lot of potential to be really interesting. Not only do you realize that the planet you're about to exploit is actually inhabited, you eventually end up finding other humans, living rather humbly, on this planet as well. Where did they come from?

But the gameplay and world design ends up being too punishing for me. What killed it for me was when I set off on a boat toward another continent to continue the story. As I get there I find that I can barely move anywhere without really having to struggle for my survival. Yet again a walkthrough explains to me that unless I've come to a certain level and acquired certain skills there is no point in me going to this area yet. But how was I to know this? Grinding for levels and money is painfully slow and arduous and the prospect of having to do this throughout the entire game just put me off it, even though the story and world really intrigued me. Just watching let's plays of it makes me really want to give it another go again.

In the end I still want to recommend Albion. For a 1995 game it is actually pretty ambitious and if you're one who is more familiar and used to the older style of game design I think there could be a lot of fun to be had here. Me, I guess I have to give it another chance when I am a pensioner and have more time and patience. The game deserves it.