Geneforge is a cRPG released by Spiderweb Software in 2001, the company mostly known for their Avernum series. I bought this game on a whim since I am a fan of old cRPGs and had also played some Avernum back in the day, I didn't know anything about Geneforge though, I had never even heard of it. After having played some NWN and Baldur's Gate and gotten a bit fed up with the overly convoluted character development and combat systems I hoped that Geneforge would offer the same kind of fun I had with Planescape: Torment, and was very happy to find out it was definitely not far from.

Geneforge is far from perfect though. First of all it's so ugly, its mama had to feed it with a slingshot as a baby. When I first started playing it I was sure it was from the mid-90s rather than the early 00 and I was shocked to find out it was actually from this side of the millenial divide. This is the same year the PC got Max Payne and Diablo 2 for comparison! It's important to remember that there is a difference between bad and bad graphics though. I know tons of people who complained about the graphics to Minecraft until they actually tried it and realized it was a perfect fit for the gameplay of the game. On the other hand I can't get myself to play a game like Don't Starve, solely because I don't like the visual style of the game (yes, call me shallow). Geneforge on the other hand is what you could call the ugly game with the good personality and eventhough I am sure the game would've been even better with better graphics, it didn't bother me in any way. It's ugly but very functional, it's easy to see what everything is supposed to be and I didn't find it any more dull than the graphics in NWN which eventhough more detailed still suffers from repetitiviness (damn that word btw).

The sound effects are if possible even worse than the graphics, and sound like something straight out of a 10 year olds first attempt in RPG-maker, if even that. If the graphics are one-sided the sound effects are even more so, and there is not a single musical track in the game except for on the title screen (which is a pretty good tune though). I can defend the graphics, but I can definitely understand why someone would have trouble with the sound in the game. Personally I didn't have a problem with them but the same effects get used a lot so if you're prone to being irritated by things like that then Geneforge might get on your nerves pretty quickly. I thought the few sound effects that were put into the game were fairly well chosen and eventhough you hear the same thing over and over it kind of just blends into the background. I have no idea why Spiderweb Software decided to do this, and my only guess is that they were on a limited budget and had to prioritize other things. Apparently it is something that Spiderweb Software are somewhat known for and I've got to say, in Geneforge they've definitely put their eggs in the right basket because gameplay and story make up for all the wrong of the graphics and sound effects.

First of all, characters creation and further development doesn't feel half as convoluted as in other 90s cRPGs. Eventhough every stat probably isn't equally useful, I never got the feeling you could screw yourself over as easily as you can in some cRPGs and it definitely did not require some previous knowledge or reading of a guide book to get through. You play as a Shaper, a sect of people that create beings to do their bidding. For the game you can choose to play what basically boils down to "caster", "fighter" "caster-fighter" (although they're called "Shaper", "Agent" and "Guardian" in the game). I played as a Guardian, because having been burnt from other cRPGs I tried to choose whatever seemed to be the easiest class. Casters have a tendency to be ridiculously difficult in early game and possibly overpowered in later game so I wanted something that could fend for itself a bit. Because of this I can't speak for the viability of the other classes, but I did get the feeling that they were fairly well balanced as there were enemies that were easy for me to take down as a melee and some that were easier as a caster. Combat, which is turn based and uses action points, felt well designed and rewarding overall. As mentioned, some enemies were no problem for me and some required a lot more careful tactics and use of items, which I put down to choice of approach. My conclusion was that I will definitely try for a caster when I play Geneforge 2 because quite frankly melee classes aren't much fun in the early cRPGs since they don't get many skills to use. The same is true in Geneforge, lucky then that I also had the possibility to cast spells, use wands and other ranged weapons when necessary.

The controls are simple enough and the game has a really good pathfinding AI which allows you to get through larger areas you've already traversed without having to lead your character through the entire place. Only in a few instances did I fumble with accidentally pressing my own character (which skips my turn) instead of the enemy, if they stood close. Otherwise it was easy to learn how to use skills, items and swap gear in combat and I never felt like I failed because the controls worked against me.

One of the things that made me really happy, and especially compared to games like NWN and Baldur's Gate, was that Geneforge gives you a decent amount of experience for killing things. Leveling went quickly at first, then stagnated somewhat and went quickly again towards the end as enemies became silly difficult. The difficulty can get a bit even but not annoyingly so. I actually had to turn down the difficulty to "easy" towards the end (another feature that is very welcome). Some enemies that were difficult to me didn't rewards much experience and vice versa, which I put down to choice of class. I would've probably had a completely different experience of challenge with another class, but overall the game gave me a definite feeling of good combat design. 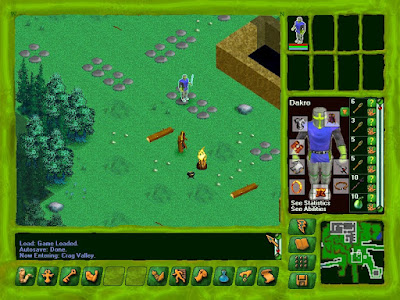 The story starts out simple enough, you're stranded on an island that turns out to be barred for reasons unknown to you. As you try to find a way off the island you get further invested into the history of the island and it all ends (without any spoilers) with some interesting choices for you to make. What I really liked about the story is how it unfolds and becomes more intriguing as you move on. You naturally stumble into things and have to draw conclusions from what you find, read and the people you talk to in a way that compares to a well written novel. Only in one instance did I think I had screwed myself over and couldn't continue, but I managed to solve it within a couple of minutes(turned out I had just not been observant enough). There is no better feeling than to randomly manage to solve a quest because you were curious and bold enough to venture into a cave and rummage around the angry ogres bed. Quests can also be completed retro-actively of course.

I was happy to see many good both male and female characters in the game and the dialogue is overall interesting enough for you to want to read it through and not just skip through. The story is presented to you as pop-up text whenever you enter an area of interest, and sometimes in books lying around, but is portioned up well enough to keep you interested without being intrusive or feel like it takes away too much time from actual gaming. 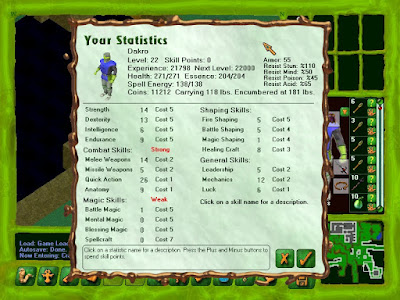 Common for these types of games, shop keepers have a finite amount of gold, which means you can drain your favorite shop keeper of all their money and sometimes have to travel around to be able to sell your stuff. This wasn't much of a problems thanks to a fast-travel system, it just required a bit of memorizing of areas. Unlike many other RPGs, you don't really lug around "junk" to sell, rather you find gems or combat items that you don't really need to sell. Uncommon however is that most gear is found, rather than bought, but as much as I love digging around for a tiny upgrade I welcomed this more streamlined approach as the gear was "handed out" with good intervals unlike in NWN where I barely ever got an upgrade and everything you could buy was well out of my monetary reach and just served to mock me. 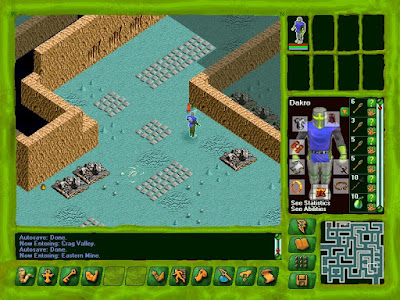 What Geneforge really succeded was that, without making me feel overpowered, it made me feel like I was powerful and always stood a chance. If one area was too difficult there were often several others for me to try as the map quickly forks out into different directions for you to explore. It made me feel like I could make my own choices rather than being led around and like I was pushing the story forward rather than the story pushing me forward. I would love to see a graphical remake of this game but it definitely still holds up. I had loads of fun with it and I could recommend it to anyone that would enjoy a slightly less convoluted old-school cRPG with an original story.