The Witcher - Thoughts and Review

I don't know what I expected of The Witcher when I first started playing it. All I had really heard about it were good things and I had seen a tiny bit of gameplay. The bf had played a bit of the intro but fresh off from playing Dark Souls he pretty much disliked anything that wasn't like that, so I knew his opinion was probably not much to go by. Having just played Dragon Age: Origins myself, which I had also hear very good things about but never really got into, and Mass Effect, another game with good reviews that I thought was ok but nothing special (though fun enough to at least play through unlike DA:O) I guess my hopes for TW were both high and low. Low because I had been disappointed by the previous so-called great games I had tried that didn't particularly tickle my fancy, but also high in that I was hoping that TW could finally prove that hadn't just become too jaded to enjoy great storytelling games anymore.

The "problem" with storytelling games is that you need to give them the time and opportunity to let their story have an impact on you. If my incentive to play diminishes from supbar gameplay, then it doesn't really matter how great the story is, I won't feel engaged anyway. Although to be fair, with DA:O I had the opposite issue where a boring story removed from the somewhat fun gameplay. 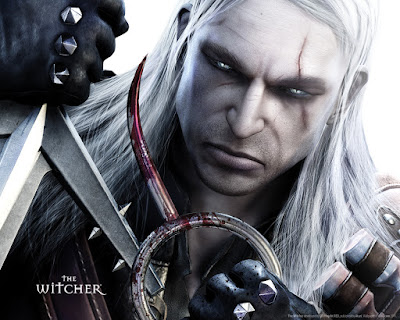 TW caught me at once however with an interesting main character and a clear goal. There is danger in having a named character with a personality from the get-go, if the player doesn't sympathize with the character the whole game will feel uncomfortable to play (I more often have this issue with movies and series than games, but it's the same basis). TW however managed to strike a fine balance between the character Geralt and the player. Throughout the game Geralt will be himself, but the game also allows the player to express their opinions through the different story options that are given. Will you save the werewolf or kill it? Will you side with the Order or the Non-humans? The game did a great job in convincing me that Geralt could stand behind either of these options without ever making him seem insincere or out-of-character. That is not an easy balance to strike and I applaud the creators for making it work so well. The options you are given are rarely morally clear-cut but often feel like they're both equally right or wrong. As such it is up to you as a player to make the final decision and it was satisfying to see Geralt stand behind either option no matter what you chose. Geralt would always give a sensible explanation to why you would act the way you did. It also provided me with a lot of thoughts when I realized things I had chosen and stood behind at first, spiraled out of my control and suddenly I was in a situation I didn't want to be in anymore. But at that point I had made my bed.

I also realized that Demonicon, another game I had played before this and also Let's Played, had borrowed heavily from especially this aspect from TW. Demonicon, which is a simplistic game with a lot of flaws, but still entertaining, also presents the player with difficult choices and that was one of the elements I enjoyed the most from that game
.

The story was maybe not the most thrilling I have ever played through, but in a way that felt good. I wasn't cast as the savior of the lands (not yet at least, I can guess that might come in later games), but as a character part of a big whole going about my business. In that way it was similar to games like Fallout (the first one) where you set out to solve the problem of your own little world, while at the same time inhabiting a world full of other peoples problems. TW doesn't start you out in the shoes of someone entangled in political deceit and worldly problems, but cleverly steers you that way by setting Geralt on his own personal quest. I must say I really prefer that kind of storytelling.

There were things in the game that irked me, though very few. The "conquest" style of bedding women felt a bit off to me, and even a bit off to the character of Geralt. Eventhough people kept telling me what womanizers the Witchers were, I never got that feeling from Geralt. More often it was the women that threw themselves at him and he just obliged. The fact that you can basically get into a steady relationship with Shani about halfway through the game made conquests after that point feel even more odd and I always avoided them when I could. And generally you can, which I was very greatful for. There were also some lose ends in the story, like Triss real motivations and whatever is wrong with Alvin - but I suspect and hope those storylines will be continued in the other games. I have no idea how faithful the game is to the books, although I intend to read them, but to me it felt like the whole womanizing thing was something that was shoehorned in to fit the source material.


The gameplay also struck a good balance between being the right amount of complex, with a nice mix of magical and physical combat. At least it felt like it had a lot of potential, that didn't really come to full fruition in this game. For instance I found it a bit unfortunate that most magics didn't feel useful at all (I basically stuck with fire and stun magic throughout, only occasionally trying the other ones out) but maybe that was because of the difficulty setting. I played on normal which I felt was fairly easy most of the time - the only time I died repetetively was on the spider boss that put bleed on me. For some reason it took me a couple of deaths before I figured out that was what it was, so all the antivenom I had taken was for naught. Maybe on higher difficulties a great variety is needed in both alchemy usage and magic usage. I liked the system of strong-fast-group style and  it worked well enough to rarely become irritating. There were some enemies you grew fairly sick of fighting, especially the Drowners and Drowned Dead and before long I decided to just run away from them. The areas varied from fairly infuriating (the Swamp) to quite enjoyable (Vizima). I don't know how but I constantly got lost in the Swamp and I was thoroughly glad when I realized I didn't need to go back there anymore (you spend a considerable amount of time there however).


The game is divided into different chapters and I felt the game only got better as it moved along. Of course this can just easily have been because the characters and settings are becoming more familiar to you and you are more invested in the story as you get further into the game. The ending I found somewhat confusing and not whole-heartedly satisfying (I am not talking about the cinematic ending, but the killing of the Wild Hunt) but this too is something I find might make more sense to me once I have played through the other games as well.


Overall I had great fun with The Witcher. I genuinely liked Geralt and he felt like someone with a realistic personality. He was stand-offish but not arrogant, he somehow managed to balance his lone-wolf attitude with empathy that I have rarely seen in other game-characters. Even though he clearly had personal issues he never made a big thing out of them but let the player think about it in their own time. I'm looking forward to spending more time with him.
Posted by Zinn at 22:12 2 comments:

I turn around and suddenly it's been half a year since I last wrote something. But I'm still here and there is no special reason I haven't been writing anything. In fact, my life has been so terribly ordinary and mundane that that probably is the reason I haven't been writing anything yet this year. Every week I will ponder if I have anything special to say or talk about and so far 2017 I have come up empty handed. Not that I haven't been having fun, I make it sound like my life has been tragically boring - far from! But I am just doing ordinary every day stuff I don't considering interesting enough to spend time writing about.

I've also always wanted to avoid the rambly writing structure, in which I write whatever just comes to mind without a clear goal (a lot like this post actually). I've always wanted to make posts that at least aim to have a point and as of late I have just not had anything to make much of a point about (that isn't horribly political and that is something else I don't want this blog to be). Maybe I am going to have to contend and accept that rambly posts, that just chronicle my everyday/week doings, is what I have in me at the moment. And let's be fair, a lot of my posts have been that way already. I'm not saying there is anything wrong with those kind of posts, in fact for blogging they probably make out the majority, it was just not the of writing I wanted to do.

But I love writing, and I still want to express myself however pointless my thoughts may be (to someone else, I'll always enjoy writing them down). Writing not only brings me enjoyment, it collects my thoughts and writing has always been my go-to thing whenever I've stressed over something or felt I needed some time to sort things out.

I don't think my posts ever came off as polished but some I actually gave a great deal of time and thought. Right now I feel like doing a lot more (even more!) relaxed style of writing - we'll see how that turns out.
Posted by Zinn at 21:00 3 comments: