There are spoilers here.

Many years ago now... I first heard about them making a remake to one of my all-time favorite games - Final Fantasy VII. FFVII was my first real single-player game experience, though I did play it in the company of one of my best friends. Thus I have nothing but great memories of FFVII and have been dreaming about some sort of remake to the game ever since I first heard about remakes. I didn't really know what exactly I wanted the remake to remake, initially it was pretty much just the graphics that I thought needed "fixing" or that I would like to see in a more modern version. Pretty much everything else was close to perfect to me, the story, the characters (well, at least the ones I cared about, see below) and gameplay. I don't even dislike the graphics in the original game, I have a very soft and nostalgic place in my heart for the blocky 90's polygons, but I was curious to see what the game would feel like if everything looked more realistic and detailed.


For the longest time I thought it was all a pipe-dream. I heard rumours saying that they could never remake FFVII because the original assets weren't workable or even available. They would have to basically make the entire game from scratch and there just wasn't enough money in it (though I couldn't understand how that could be true since surely a remake of a game so beloved would sell well?).

Maybe it wasn't until Capcom showed the world how great a remake can be done when they released Resident Evil remake for the Gamecube that anyone actually thought that they could be worth the time and effort (to earn the money). Maybe a remake could actually add to the original experience by walking the fine line of nostalgia and new game with new technical advancements.

Either way it may be, SquareEnix at least decided to announce that there was going to be a remake and I was hype from the very first second. Hype enough to pretty much immediately invest in a ps4 although I had had zero interest in the console beforehand and even though SquareEnix hadn't even announced any kind of release date yet.

I couldn't fathom how long it would take them to actually get the game done and in the meantime I got a lot of fun out of my ps4 playing other games, so I definitely don't regret that buy anyway. I had already given up hope on FFVII ever making it off the drawing table when it seemed suddenly it was almost upon me.


The release date, a mere week before my birthday, seemed too much of a sign (not that I needed any signs!). It was finally coming, it was finally here!

I was betting on getting the game for my birthday but as there was a week between the release date and my birthday I realized I could be waiting a whole week for nothing if it turns out that wasn't actually part of my gifts. I had to ask. Turns out it wasn't part of my gifts so I immediately set out to buy it. The Deluxe Edition, of course.

A few, gruelling, days later I had it in my hands. I can not explain the amount of hype I was feeling, despite trying to calm myself as I knew more hype just increased the likelihood of being let-down.

I started it up (after almost an hour of installation) and started playing.

It didn't start out well since I for some reason chose to invert my camera and so couldn't control it at all as soon as I was out of the first cut-scene and on the platform by the train station. First thing I had to do was reload and fix the setting (since that early in the game I didn't have the menu option to do it yet). Fortunately it only took a few minutes and I was ready to go, again.

And what a beginning it was. Now, bear in mind I am only some four hours or so into the game so I am carefully very optimistic about what I have experienced so far and what it means for the game as a whole. There is still plenty of room to mess things up, but these first few hours have pretty much lived up to exactly what I envisioned my ideal FFVII remake to be.

I don't know where to start so let's just go with random thoughts.

The music. Love it and love that the rearrangements are close to the original. Why change a winning concept? The original OST is so strong and something that's strongly connected to the nostalgia of the original game. I am glad they didn't decide to change that up too much because every tune that I have heard so far has put a massive smile on my face.


The characters. The remake has managed to make me feel something not even the original could. I really care for Avalanche and Jessie, Biggs and Wedge. While I didn't feel indifferent to them before and thought it was a bit of a bummer that they end up dead, I am already feeling a great sense of dread and sorrow knowing what will happen to these great and funny characters, especially Jessie!

I used to never like Tifa in the original game and never used her as a party member other than when I had to but I've barely got to spend any time with her in the remake so far and I think she is great! I prefer fighting with her over Cloud!

I've dabbled with whether I prefer the Japanese or English audio and they're both good. For now I am going with Japanese however, only because the odd "eh", "ah", "uh"'s that Cloud does here and there work better in that language. I even think Barrett sounds better in the English dub, but they all sound good.

Overall, and I never thought I would say this because I usually prefer to play games without voice acting, this game has managed to make all the characters I have met so far a lot more interesting and alive than they ever were in the original.


The battle system. I had heard they had changed it from the static ATB system that I quite honestly love about the original game. Back in the day when I first played it I didn't consider myself good or confident in gaming and the mere thought of real time battles made me break out in sweats. A fighting system that allowed me to take my time in making my choices suited me ideally.

I've played a heck-ton of games since then though and real-time battles are definitely not something I struggle with anymore (Dark Souls doesn't count...). I was very weary about the idea of changing the original fighting system and thought that could be the one big thing I wouldn't enjoy about the remake but so far... I love it!

It might help that I've just spent 100 hours with The Witcher 3 and that the battle system is fairly similar. It's a system I am familiar and comfortable with but I also think it is well designed and fun to use. It's not perfect though. I find it way too hard to spot when the enemies are using special skills so that I can dodge or block them, but that is also my only complaint this far in.

The world. Some set pieces are almost brick by brick recreations of scenes from the original game and I just squee every time I recognize a place. I remember exactly what they look like in the original and comparing them is so much fun. Looking up into the sky only to see a big slab of metal hanging over my head hundreds of meters up was also a very humbling and thought-provoking feeling, one that the original game managed to convey greatly without the ability to pan your camera but the remake made it really hit home with me.

So a few hours into the game and I have barely anything to complain about. So far it is exactly what I had hoped for and it gives me all of the nostalgia from the original while also infusing it with a new and fresh feeling. I am hoping they manage to keep it this good throughout, because then I am envious at myself for the absolutely amazing journey that lies ahead of me. (Seeing Jenova! Finding Vincent Valentine! Summons! Red XIII! OMGOMG).

Images from polygon.com,
Posted by Zinn at 21:59 No comments:

I am neck deep in to The Witcher 3 and WoW Classic and I fear I will never see the light of day, i.e play another game any time soon. This is exactly what happened the last time I played WoW and pretty much the only thing I didn't like about playing it - the fact that it took so much time from me playing other games.

I know, I know. Why don't I just... play other games? I don't know! Why does anyone do things they don't want to do although they actually want to do it, like eat too much candy?

I guess it's ok because I am genuinely enjoying myself. It's not like I am playing out of a feeling of obligation, because this time around I am not raiding or affecting other people much. To be fair, I tried to always steer clear out of playing WoW that way, and I think I succeeded most of the time (or at least succeeded into talking myself into that I wasn't playing for those reasons). (To be fair though, I am sort of also playing Hollow Knight, and enjoying that too!, but it's taking me forever to get through because of reasons so I barely count it).

So I am having a lot of fun with these two games (hence why I am playing them) but there is a niggle in the back of my head about all the other great games out there that I read about and want to play. I couldn't even begin to list them, then we'd be here all week.

We'll see what happens when FFVII remake comes out however because I have been looking forward to that game pretty much since it was announced and I don't see myself putting that on hold.

And now over to something completely else. You know when that annoying relative forces you to sit through their holiday pictures? Yes, this is going to be that. Except I can't force you to look at them I guess…

While looking through my extended hard drive for something completely else, I came across some folders of old WoW pictures. So let's share some! Personally I love looking at other people's old screenshots, so if you have already made a similar post like this I would love to give it a look. 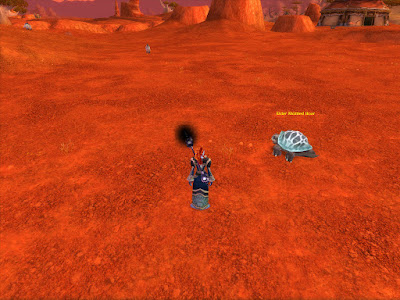 October 2008. Me trying out my new "Polymorph Turtle" spell. 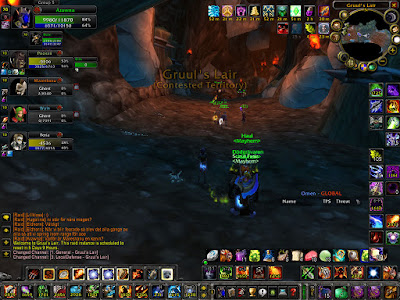 February 2008. Corpse run to Gruul's Lair on one of my alts. We managed to kill him eventually. 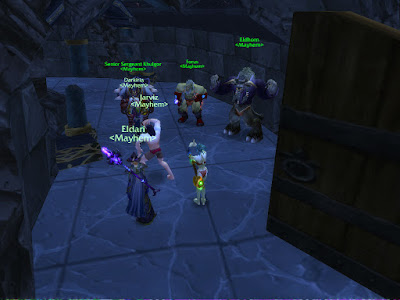 March 2008. Dancing naked in Karazhan, because why not. 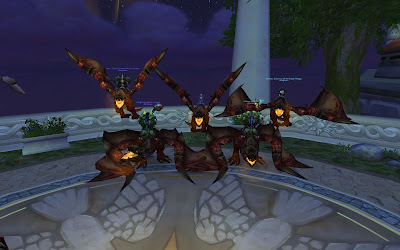 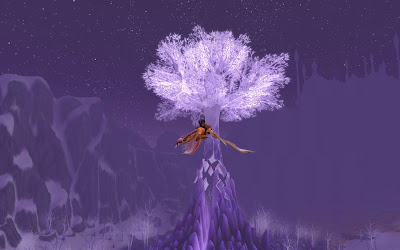 April 2009. I levelled so many prot warriors. 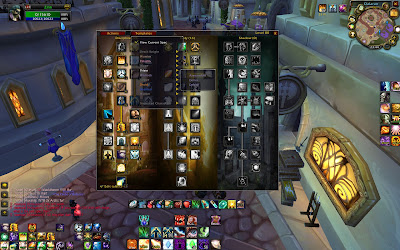 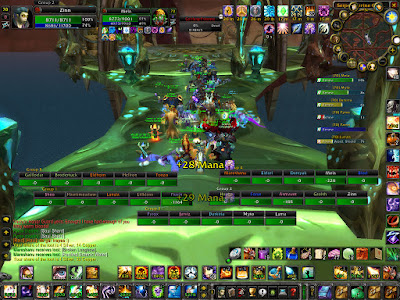 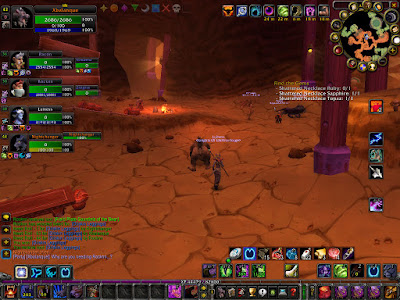 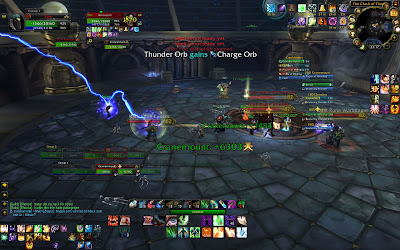 There are tons more of these, the oldest are from early 2008 though and it would've been fun to have pictures of my first three years in WoW too. But I guess I can reminisce just by logging into the actual WoW Classic now (though I have no pictures from BC). I'll spare you the rest, for now.
Posted by Zinn at 21:04 2 comments: