The cherry on the cake.

My best gaming experiences are almost all a shared gaming experience. The countless hours I've spent in the sofa (or on the floor in front of the TV) at my parents playing games like Mario Kart, Mario Party, Golden Eye and Super Smash Bros. The even more countless hours I've spent playing World of Warcraft. But also games that you'd normally consider single-player experiences, like Final Fantasy VII or Resident Evil. To this day I am certain that a big part in why I love gaming so much in the first place, comes from watching my mom play games like Myst, Diablo and the Dig. 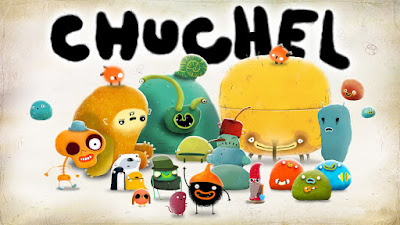 This, of course, is something I want to share with my son. Just as I love building lego, drawing, walking in the forest to find cool insects or play pretend games with him, I love playing video games with him. And I've found that his 4 yo brain has its special way of thinking of gaming and puzzle solving that really adds to my experience as well. Firstly he simply enjoys puzzle solving a lot more than I do, and brings the enthusiasm I need to try and retry more difficult parts. Secondly, I find he thinks about solving puzzles differently from me, and often brings the out of the box thinking that I need. Of course, being 4 yo it is clear he wouldn't get very far in the games we've played together (that have been designed with adults in mind) without my help, but while I might do the big nudging to get us forward he definitely sometimes helps me as well.

So while we also play racing and platforming games together, I often find that puzzle solving games have worked best for making it feel like we're in it together. It allows us to have a dialogue where we suggest things for each other that I find unique to the genre. I also don't have to help him (ie take over the controller to make a difficult jump) as much as I help him help himself (or us) move forward.

We recently played The Room together and had a lot of fun with it. I was definitely on the lookout for something similar to play together with my kid, but even though I heard of Chuchel already when it was released and I immediately thought it looked interesting, for some reason I didn't think about that it could be a fun game for us to play. It wasn't until the other day, when it popped up on the gog.com summer sale that I decided to give it a shot.


Just like The Room, Chuchel is a very short game. Even with me and the son playing around, not always trying to solve the puzzle but just trying to see what clicking on everything would do, I think we clocked in at around 2,5 hour gameplay when we reached THE END. Unlike The Room however, Chuchel is almost more of an experience than it is a game (like a sort of puzzle version of the "walking simulators). That is not to say that it isn't fun to play, and we definitely had a blast with it.

The premise is simple and reminiscent of the Scrat + Nut short films that air before the Ice Age movies. Chuchel, which I assume is the name of the protagonist, is a little soot ball who just wants to eat their cherry. In various screens it is prevented for doing so and you need to solve the puzzle to allow them to get to it. This game has no in-game text or dialogue, making it universally appealing to pre-reading children in the same way that for instance TV-series like Shaun the Sheep or *shudder* Angry Birds does (Pencilmation is another great example of this type of entertainment). The comparison to TV-series is actually apt in many ways, as Chuchel almost plays out more like an interactive, and incredibly whacky, cartoon than a regular puzzle game.

While the game will mostly present you with a puzzle or scene where you get to click on various things to see how you can interact with them (presented through icons rather than text) it often intersperses with cut scenes and the title Chuchel pops up so often you think the creators story boarded the game like TV-episodes (Wikipedia even categorizes it as an "adventure game" rather than a puzzle game).

While the gameplay is simplistic, and I felt instantly understandable for a 4 yo, the puzzle solving itself felt a lot more trial and error. But definitely not in a bad way. Often it is completely impossible to be able to tell how different things on the screen act and interact until you've tried to click everything at least once. Chuchel presents itself like a fever dream and all the crazy characters you encounter are probably as weirdly disturbing to an adult as they are hilariously wonky to a child.
While we never had to use a walkthrough to get through any puzzles, I credit this to the excellent in game tip system. Once you've tried a puzzle for a while, a little question mark will pop up somewhere, explaining roughly how to solve the puzzle but keeping with the rest of the in-game style. Nothing is explained flat out or in text, but rather with pictures or little animations. Sometimes the tip is as much a puzzle to understand as the puzzle itself, but I felt the balance was great and using the tip didn't feel like just being handed the solution. 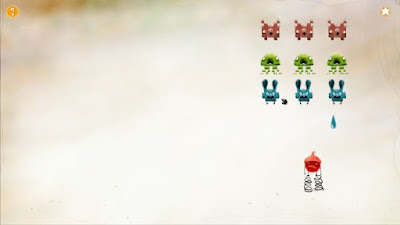 All of the gameplay is handled with just one mouse-button, and while most of it is just clicking around for various ways to interact with objects, there are also more action-packed parts to give you some variety. For instance there is a Space Invaders-puzzle, flying or jumping through obstacles stages and all of these can still be controlled with just the mouse button. You are also given the option to control these stages (that require a bit more reflexes) with the arrow keys and I personally preferred this while my son preferred to stick with the mouse button.

Of course this isn't a game where you can die nor are you on a time limit, so the bf said over my shoulder that the game seemed void of challenge (and thus in his eyes pointless). I just replied that in a puzzle game the puzzles, namely solving them, is the sole challenge and that goes for pretty much all of them. This does leave the non-puzzle parts feeling "pointless" in the meaning that there is no way to fail them, but yet again I feel like they are more there for providing an experience in between the puzzle solving bits. And this works perfectly to mix things up for a 4 yo, in fact one of my kid's favorite parts of the game is where you have to run and jump your way through a section (think a very light version of Bit.Trip Runner).

Gameplay-wise Chuchel isn't doing anything new. It's basically a hodgepodge, and in some instances versions, of existing games and gameplay-elements. But that's not why you want to play it. It's all in the presentation and aesthetics of the game. You simply haven't seen Pacman or Tetris this way before. The sound design is an equally lovely bunch of hums and umms that adds to the overall style. Chuchel itself just spouts gobbledygook and flails its arms to communicate with various things and my 4 yo loved pointing out how funny everything sounded. Since Chuchel has a soundtrack I am assuming it had music, but to be honest I can't remember any of it. It doesn't detract from the experience, but what you'll remember are probably the sound effects rather than the score. (Listening to the score on its own it's actually pretty cool).

Once you've beaten a part you can revisit it to replay it, and and for myself I'd have to admit I wouldn't say there is much replay value in Chuchel. The kid enjoys replaying some of the more platformey bits (as mentioned above) but overall I think once you've beaten it few people would care to revisit.

What a visit it is though. You just don't see things like this every day, and the sheer surprise effect of almost everything on screen, the amount of times you're thinking "what am I even looking at" and of course the laugh from my 4 yo when Chuchel gets smashed flat by a hammer out of nowhere, his enthusiasm when you play a Pacman clone and to see his joy when he experiements with turning Chuchel into different animals at one point - it's like a really great movie experience but with the added fun of interactivity where you control the story.

Chuchel won't provide you with much challenge, maybe not even a lasting effect. But it will definitely brighten up a few hours of your day, and I can definitely recommend playing it. And if you have the opportunity to play it with a kid, I'd say that is the way to go about it.
Posted by Zinn at 21:05 No comments: