Retro-Thoughts, in which I try out one of the many games I missed out on during my youngers years and give you my thoughts on it. This time it is...

What did I know about Star Control before trying it? Absolutely nothing. Well except that it's categorized as an "adventure" game and takes place in space. Which I guess I could've guessed from the title really... I always check a bit of gameplay and screenshots before purchasing a game, sometimes even a metascore if it's a newer game. I got Star Control on Gog.com and they've bundled it with Star Control 2. Now, after having tried the first game, I realize that it is not entirely clear whether the screens on gog.com are from the first or the second game, but I guess they are rather the latter. Graphically they're very similar but I suspect that gameplay-wise they're not. 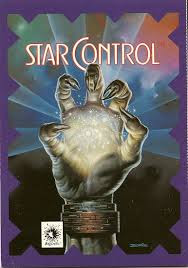 Just looking at Star Control I wasn't entirely sure if it was my cup of tea. I liked what I was reading about it, if you've read any amount of posts from me before you might've seen me mentioning Escape Velocity, a "space trading and combat simulator" game as wikipedia puts it. I love Escape Velocity and thought Star Control sounded a lot like it. Looking at it however it was verging on the style retro-graphics that I can handle with a bit of overenthusiastic coloration and everything being just too close up or too pixelated to really make out what I am looking at. But as I very rarely let graphics alone get in the way of me trying a game out that otherwise sounds like fun, I decided to give Star Control a spin.

So I started it up and immediately had no idea what I needed to do. With older games the first thing to figure out is always what keys to use, because it's rarely the good old "WASD"-configuration. I say "good old" but back in the day it seems like each game used their own setup of keys and holy macaronies am I happy that is no longer the case. I did manage to get my ship... err wait a sec, ships? Am I playing two ships at once here? I don't get it... well anyway, I did manage to get them both to fly around and shoot stuff, but had no idea what to do beyond that. Was I supposed to kill the other ship? Is Star Control a multiplayer game?! Why had no one told me!

That seems to be the case so after aimlessly flying and shooting around for a bit I decided to try out one of the other game options. As I assumed "practice" was the same as "melee" I looked at the last one. Oh wait a minute, no need to worry - "Full Game" is right here, surely this is where the actual game is located. I start that up and... I have even less of a clue of what is going on than before. At least in the melee and practice option I thought I knew what to do, although it seemed rather pointless for me as a single player. But now I am looking at a screen with a lot of dots floating back and forth and I guess one of those ships is supposed to be me? I've got a couple of menu options like "move" and "mine" and "fortify" so that sounds promising at least, that sounds like I've indeed come to the adventure or possibly strategical part of things.

At first I try to actually give things some thought. I try to figure out what could be a good move? Bearing in mind I have literally no clue what the objective is or barely even what I am looking at, my trying to think things through doesn't actually produce much in terms of results. I move my ship around a bit, fortify some things and mine some things. Then I move my ship back. Then up again. More mining and fortifying. Sometimes I get a message about something, but it doesn't seem to make any difference because I keep moving my ship around the dots without anything else happening. Whatever is supposed to happen isn't and I really don't understand what is going on. Unless this is the game? Maybe this is what is supposed to happen and I am winning! But I can't tell. 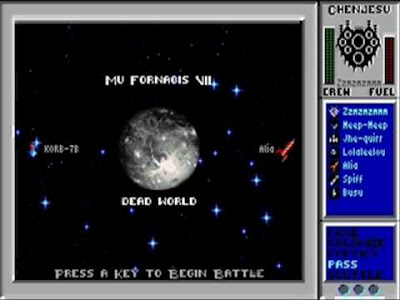 I sigh... Star Control seems to be one of those retro games that people have a very fond memory of, and I don't doubt that it is a good game. If you can get to it. Star Control is a bit blocked off by distance, and by that I mean distance in time. Being released in 1990, for a computer game especially, Star Control is pretty old and from a time when conventions like explaining the game in-game weren't in place yet. A game like Star Control feels like you pretty much have to read through the manual to get a hang of and probably also be in the mind-set of really old-school computer games, they were just crafted differently back then - for better or worse. For me and in this particular case, the bar was too difficult to get over and I quietly uninstalled it again after about an hour of finnicking around with it.

Star Control left me feeling left-out, too young to understand a game too shaped by its time. Maybe I needed to give it more time, but if one hour of poking around didn't make me one bit smarter I think I am a hopeless cause. Star Control and me didn't click, and in a time when there are so many other games wanting my attention, it's very difficult to sit around for too long with one that gives me a very cold shoulder. It made me no less interested in trying the sequel however, rather the opposite! Star Control 2 also boasts a rather awesome soundtrack so I am definitely looking forward to trying that out.
Posted by Zinn at 20:37 2 comments: