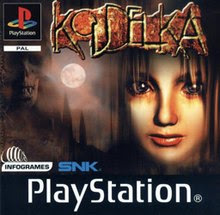 Ever wondered what Resident Evil might be like as an RPG? Do you think the horror RPG genre is criminally underused? If your answer to any of those questions is yes you should probably check out Koudelka (and quite possibly already have) - a horror JRPG from 2000 (in the west).

I didn't know much more about Koudelka than that myself, only having watched a friend play it for a bit way back when (probably only a few years after it was released). I only remember thinking it looked like a fun RPG and then the thought lied dormant in the backwaters of my mind until a year ago or so when I decided to buy it (and it still took me until this year to actually play it).

My expectations were of typical JRPG on PSX type i.e many play hours, long loading times, either incomprehensible or cliché stories/characters, lots of grinding - even if you've played no more than any Final Fantasy game you are probably also familiar with the drill.

You play as Koudelka, a spiritual woman drawn to the Nemeton Mansion and Abbey since someone inside is calling out to her (you know, spiritually). The place is fictional but set in Wales, because of this the characters are portraid as English-speakers and the dialogue was originally written for the English language (not that that helps it much in terms of quality). She almost immediately finds Edward, a thief who's there to find loot and not much after they're joined by James, the sanctimonious priest who is there because he is pretty involved in the reason the abbey is haunted by all things horrible in the first place. The characters pretty much despise eachother throughout the game and only very reluctantly decide to help each other out. None of them is especially likeable either, although James definitely stands out as an extreme "holier than thou"-kind of guy. For someone spreading the word of love, he doesn't hold much love and the fact that a lot of his backstory gets rolled out throughout the game does little to make you like him more.


The story overall doesn't make much sense, and not even in the "ok they decided to reanimate the dead but why is everything so convoluted and illogical in this place?"- kind of way deployed by beforementioned Resident Evil. The basics are similar, someone gets resurrected and shit gets out of hand. Only here it's a man called Patrick who loses his wife Elaine when she gets murdered by a burglaring thief. Both Patrick and the groundskeeper Ogden go a bit nutty from this, Patrick swears to resurrect Elaine (by killing a truckload of women for their blood), Ogden swears to murder anyone who dares enter the grounds (because he is just nutty). In the end a lot of people die, they only manage to resurrect Elaine's body but not her soul and that body is running rampant. So are all the dead people's bodies and souls too for that matter. You find out Elaine is the one who called Koudelka to the place to fix things, while James also loved Elaine and was a friend of Patrick's.

While this could've been enough in itself, a couple of other characters are thrown in supposedly to flesh things out and harken to the abbey's long history- unfortunately they only make things more confusing. We meet the spirit of Charlotte, a little girl who was killed on the grounds. She is not happy and pester the team early on in the game, but nothing much is done with her. We meet another thief (and kill him). We meet Roger Bacon who has been alive in the abbey for hundreds of years (and looks the part). All of these people are thrown in to further the story in some way, but aren't given much substance on their own.

Personally I love the story of Resident Evil, so convoluted and confusing doesn't have to be a bad thing if you can still create interesting stories within that world (for example the fate of the Trevor family in RE remake). While the story in Koudelka has potential, and the surrounding abbey definitely does a great job setting the mood (and the enemy designs are great) the story feels rushed and so you barely have time to start caring before it's all over. I finished this game in about 14 hours, and one hour of that is the final boss encounter alone! Factor in long loading screens within battles especially and the actual story probably only holds half that time in content. There are a lot of cut scenes too, holey moley are there cut scenes. No wonder this game is on 4 discs, I swapped the first one after only three hours of game time. A quick search on Youtube show that over 1,5 hour of the game is made up of cut scenes (one 8 minutes long), and while they further the story (more or less), it leaves very little for actual gameplay.


Which is really unfortunate since the gameplay probably is Koudelka's strongest asset and when the credits were rolling I found myself wanting to spend so much more time in this game. The lacklustre story, the unlikable (but still enjoyable) characters and loading times all together still couldn't remove the fact that Koudelka is in the end a fun game to play. Firstly, it keeps battles interesting by always keeping a very balanced challenge level. While you never feel overpowered (unless you backtrack to low level areas) you never feel like the battles are a chore or heave a sigh whenever the battle screen loads up. Which is otherwise not uncommon in JRPG's with random battle encounters. In fact, I only felt I needed to grind some levels once, somewhere mid-game, to make things run a tad bit smoother. The game is extremely generous with save spots of which it has two different types - the "regular" save spots, which will also heal you up, and "temporary" save spots which don't (and of which you can only have one). These save spots can sometimes be in adjacent rooms so also unlike some JRPG you rarely have to wonder when booting up the game if it's going to be a forced two hour session.

While the regular save spots almost always have a boss guarding them (thus this game has many bosses), it's always flagged in advance making sure you don't run into one of them unknowingly. You also get full health and mana from levelling up, and level up you will - a lot. Every two or three fights I found myself getting another level, and like I mentioned this was even though I felt I was otherwise at the right level for the encounters. Every level up you get four points to spend on your stats, and it is wise to keep a fair balance. Giving yourself too much magic resistance goes two ways for instance, meaning while you will resist hostile magical attacks you will also resist healing effects.

Let's back up a bit to battles though, some of the critique of this game (which received mixed reviews) were the battles. They weren't designed by Hiruki Kikuta who did the rest of the game and so many people feel like they are out of style and touch with the rest of the game. While I can understand the people who feel that way, I still think the battles are fun. You move your characters around on a grid, casting magic or using your weapons. Most weapons, except ranged, only take about 10-15 uses before they break which means using your bare fists is the best way to go for regular encounters. The fact that you have no opportunity to restock on your inventory meant I was scrounging for everything, and so had a ton of unused items by the time I had finished the final boss. Because there are save spots everywhere and you get back all your health and mana from every level up (which as mentioned is frequently) I rarely found a reason to conserve and hold back on using spells. Pretty much every enemy can silence or poison you (poison is very weak though), but fortunately you don't retain any status ailments after battle.

The only few things that annoyed me about the battle system was that when one of your character dies (this only happened to me twice in the game), if the enemy has moved passed the point where the character fell (which they almost certainly will) you can't resurrect them anymore until you push the enemy back. If dying was more of a problem in this game that could've been a real nuisance. Also it's rarely particularly clear what resistances enemies have, so you'll end up accidentally healing them every now and then. You also have the option to "wait" with a character, presumably to find a better time to act but sometimes it will go back to that same character (at least) four times in a row. But overall, even though this game has random encounters like so many JRPGs, the battles never became troublesome or boring for me.

The game has some puzzle elements, again similar to the style of Resident Evil (think keys and gems being put in the right places to advance) and overall they flow well. Only one about walking on runes on the floor in a certain pattern to unlock a door gave me a bit of a headache. I can see people having more trouble with actually being able to distinguish what they can interact with in the surroundings than figuring out the puzzles, as the classic PSX graphics really can make some scenery very obscure. They've tried to solve this in game by having Koudelka turn her head towards things of interest, but sometimes even that is hard to make out. In the end I found myself just crawling every wall, clicking X frantically until I had searched the entire room, and quite frankly I found this working fairly well. Again, this wasn't something I found bothersome but rather something I expected from a game of this era.


There were only really two songs that stood out to me, and those were the Battle Theme and the Boss Battle Theme (there are in fact more battle themes than just those two, but they sort of blend together). Not necessarily because they're so good, but because you'll get to hear them so often. As so much else in this game they never ended up grating on me but meshed well with the rest of the tone of the game. When I first heard them I remember thinking that I didn't find them to be suitable as battle themes, but they really grew on me over the course of the game.

For better or worse Koudelka isn't much of an investment. You won't have lost much on giving it a try, but it also won't give you much to do before it's over. Since I enjoyed the game I found this to be quite a let down and I would've loved to explore this world more. In the end though that disappointment comes from the fact that I had really fun with it. It was well worth the few hours I got to spend with it.
Posted by Zinn at 21:42 No comments: