Toddler & Game - Whip The Hair Back and Forth

My son is almost 2,5 years old and so far I haven't actively encouraged him to play video games. We don't own any kind of tablet and I won't let him use my phone or PC (because he messes everything up!), so he's left to the consoles we have standing around. It's not that I'm worried he'll be too inactive, he spends about 80% of his awake time running around, but rather that I am worried about the well being of my consoles. The level he's been at so far is turning the consoles off and on again and as long as that was the case I prefered him doing other things.

But that is changing, and it is very interesting to see. It started with Yoshi's Story. I'm not sure how he got interested in the game to begin with, I was probably playing it at some point or other - but he loved the intro sequence and especially the music. After that it was impossible for me to try to play the game, he reset the console after the first minute or so of intro, rewatched, reset, rewatched and so on until I told him we'd go do something else (it didn't take long before I felt sorry for my N64). Same thing with Sonic on the Mega Drive (my bfs favorite game).

Eventually he would press a button on the controller, because hey! buttons are totally fun to press. And they are! In video games all kinds of things happen when you press the controller and he quickly figured that one button would make Yoshi eat stuff and the other would make Yoshi jump. So we licked and jumped a lot. But obviously he still had no grasp of the concept of the game, to get to the end of it. And when you're that age you make up your own rules and try out new things all the time. It's one of the most charming aspects of the age and I normally let him to it until he figures something out that he likes. Besides, who says you have to play games a certain way? The main focus is to have fun with them. I used to play Settlers 2 completely without enemies after all, simply because I enjoyed building up a society without the hassle of adversaries.

Sometimes however, I like to try things out and see what he thinks. Because the controller is way big for his wee little hands (they're totally cute), he can't push the buttons and make Yoshi walk at the same time. I decided to see if we could co-op play the game where I would make Yoshi walk and he would jump and eat things. And it was actually really fun! It was a huge challenge for me, since I needed to avoid dangers and make sure to not run into enemies/pits until the son was pressing the right buttons, and he was having a blast getting to eat fruits and jump over pits. Great success. Although resetting the console and watching the intro sequence is still what he enjoys most so far.

He had less trouble when it came to my N3DS, something I have been lending to him only very reluctantly because that is 150 euro of hardware he could decide to throw into the floor at any second. Not to mention my fear that he would accidentally erase some data from it, I've been through that horrible experience before (yes I am looking at you little brother!) As I was sitting next to him and supervising his every move I realized that there is actually a lot more for a toddler to enjoy about a 3DS than I initally thought. For instance I didn't have a clue that most main menu icons are sound triggered, in which they will move faster if you blow or speak into the mic. My son discovered this quickly and will sit yelling at the 3DS for a while before moving on to other things. 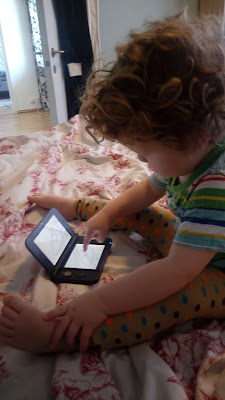 Next he discovered my Shantae and the Pirate's Curse in which he could shoot and hair-whip as Shantae, which he loved for some reason. It took him quite some time before he even tried to run around, and because he was at my end-game save he ran straight into the final boss... which he BEAT! I'll be completely honest and admit I activated Pike Ball for him, but other than that I didn't touch a single thing and he managed to finish the final boss of Shantae and the Pirate's Curse just by pressing things randomly (because I really doubt he knew what was actually going on).

He also found a drawing program I didn't even know the 3DS had (turns out it's the Letter Box feature where you can draw your own letters and also replay your drawing, it's quite cool) and the camera. Next time I checked he had taken 20 pictures of his feet and drawn 30 letters full of squigglies.

And that's the level we're at at the moment and it'll be interesting to see how that develops further on. I'm still not in a hurry for him to get any kind of hooked on video games, as I am certain the Minecraft curse will affect him too soon enough. But I am also not against him playing some every now and then as it is in fact interactive entertainment just as with any other toy. Who knows, I might let him inherit my Game Boy Advance SP for his third birthday. He would probably just look at it and wonder why there isn't a touch screen or camera though.