Classic WoW - I Just Want It To Be There For Me

I'm sure most people are just like me in that there are certain pieces of entertainment, be it movies, games or books (most likely all of them), that you just want lying around. Either you have them on display or not, you want them close by. Even if you know you won't get around to reading/playing/watching it even once this year, there is something that makes you want it nice and handy, just in case you feel the urge. To me it can be a book like The Count of Monte Cristo, a game like Heroes of Might and Magic 3 or a movie like Seven Samuari. These are items I get back to every know and then and there is something... calming... about knowing that I can do that whenever I feel like it. Even if I never feel like it again, I want to have that option.

This is what I want to do and can't do with Classic WoW.

After having played it since (re)launch last year I have been having a swell time. Most things about it are so nostalgic I love them exactly because they're tedious or not entirely well-designed. Many things I find are actually a lot better than I remember them, dungeoning being one of those things. I have been going at it very slowly too, my highest character at the moment still being only level 40. 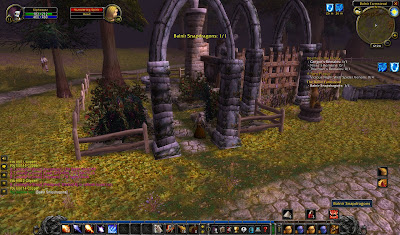 In many ways I am so conflicted when it comes to Classic WoW and in some ways I am not at all. I love it, to bits. It has such a huge part of my life (along with the first couple of expansions) I can not state enough what an important game this has been to me, and still is because of that. Every time I log on, every time I do something I've done a thousand times before I get that nostalgic twang in my heart of pure happiness.

But I have done these things a thousand times before. There is pretty much nothing in Classic WoW that I do not know inside and out already (I didn't do a whole lot of raiding in current Classic so that would be the one exception). Whenever I log on it is solely for the nostalgic feeling and pretty much nothing else. I don't feel like there is any wonder of learning or discovery left for me in this game.

And in many ways that is absolutely ok. When I re-read the Count of Monte Cristo for the umpteenth time I obviously know exactly what is going to happen. Rewatching Seven Samuari I am not entertained by the elements of surprise anymore. Now instead I am entertained by the fine craftmanship and the memory of the first time I experienced it and how blown away I was at that point.

But even though I find the Count of Monte Cristo and Seven Samurai to be absolute masterpieces I don't want to re-visit them too often. I want them close and handy in case I do want to experience them again, but often there are a few years in-between each time nowadays. Often it is just enough to look at them to get a good feeling, and it isn't until a few years have passed before you need to refill that nostalgia-well.


The same thing goes with WoW Classic, but unlike pretty much everything else I can't really own my own copy of Classic WoW to put in my shelf knowing that if I ever, like 40 years from now, want to play that game it is just to pop it into my computer and go (ok, this is an issue facing a lot of computer games, but mmo's have an even shorter expiration date).

MMO's are experiences you only get to borrow for a short time. Once you start playing it you never know how long you're going to be allowed to stick around and World of Warcraft has proven to be one of the longest runners in the genre. In fact we should probably consider us damn lucky we even got a remake the way we have.

And I am. I am so grateful. I don't take it for granted at all. That is why I am afraid that if I don't keep it around it will go away again. It will only stick around for as long as people pay obviously, but can I really justify paying the monthly fee just to have it sticking around because I don't want it to ever go away? It is going to go away eventually anyway.

There are so many things they got right with Classic WoW. While I haven't played retail since a short foray in Warlords of Draenor or whatever expansion it might have been, I personally feel like Classic really entices you into playing with other people in a way that has been removed in many ways from later expansions. You could say Classic even forces you to, because there are so many situations, even early on in the game, where you will find yourself struggling even with a regular quest if you don't find someone to back you up, this is definitely a lot more true for some classes than others.


And overall people have been so damn nice. Maybe it's because I'm not on a pvp server like I used to be back in the day, so of course there is a lot less opportunity for people to be asshats, but in instances and during questing I find that generally people are generous and friendly to each other.
But I mentioned the quality of different classes and I find this is where WoW probably has done a lot of improvements, though my personal point of view is that they've taken it a bit far in the more recent expansions (this based solely on what I've read since I haven't actually played it myself).

When I play Classic WoW now, and I have rolled pretty much every class so far except druid, I find that each class is very differently equipped for how well it handles itself in different situations but a lot of the fun comes down to something as simple as agency. When shit hits the fan, it is so much more fun to play a class where you feel like you have three more tricks up your sleeve to solve the situation than one where you feel all you can do is throw your hands up in the air and hope for some lucky crits.

This is true for solo-questing and grouping alike as the more useful you feel like you are, the more fun you are going to have. Some classes are more useful to themselves, some more useful to a group. Either way, in the end you want to feel like you have choices even when things go bad. A class like warlock has the usefulness of Healthstones, Summons, Soulstones, pet buffs, cc and self-healing abilities. A class like warrior has the usefulness of barely being able to tank and yeah that is pretty much it... Druids can jump between tanking, healing and dpsing when necessary, which becomes fairly obsolete at end game unfortunately but is actually really cool in mid-game. A resto shaman is pretty much just a glorified totem-mover… I could probably write a whole post on this and might even do that.

Blizzard get so much better later on at giving all the classes different tools for feeling like they have agency and something to bring to the board. I feel like if I had one complaint about woW Classic right now it wouldn't be about the difficulties in getting money or how much running around there is but that some classes get extremely repetative very quickly.

And right now it's like I get to around 35 ish with a class and I sort of don't feel like going further. Which isn't true, because I definitely want to see instances like Sunken Temple and Zul Farrak, and areas like Western Plaguelands and Hinterlands before I feel like I am done with this game this time around.

So now I am stuck in this limbo of wanting the game to be around for me to play, but without actually wanting to put very much game time into it. I just need it for a quick refill of nostalgia every now and then, and I am not sure the game can be played that way...

Images from Barnesandnoble.com, bbc.com.
Posted by Zinn at 20:48