One of my favorite games ever is Settlers 2, or Die Siedler as the original German version is called and which my optimistic German grandma gifted my then 8 year old something little brother back in the late 90's. I can see her reasoning, Settlers 2 is seemingly a game about building rather than killing and destroying, during a time when DOOM and all their clones were flooding the market this must've seemed like a boon to all the wanna-do-good grandparents around, and overall grandma was correct. Although there is the possibility to kill enemies in Settlers 2, the majority of the game is spent building, crafting and balancing resources.

My 8 year old brother had zero interest in that concept however, but I did. At first I played entirely without enemies, probably unknowingly exactly the way my grandma would've wanted, and it turned out to be a great way to learn the basics of the game without the stress of being killed. When something stopped working I could slowly figure out why. 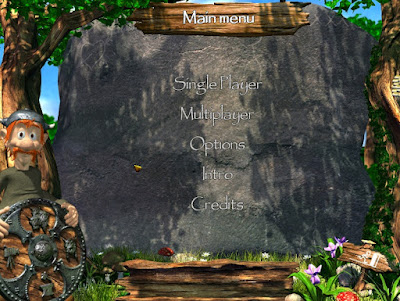 Knowing how much fun I'd had with Settlers 2 throughout the years made me curious to check out Cultures, originally released in 2000. Starting it up I was immediately greeted with the possibility to play a tutorial, but I decided to opt out figuring that a well designed game would make me understand while playing, the same way I had with Settlers 2 all those years back.

My first impression was at once that it reminded me a lot of Settlers 2, which meant Cultures was off to a good start. And interestingly enough Cultures was also designed by a German developer, Funatics, just like Settlers 2, Blue Byte. In fact, the people who started Funatics were ex-Blue Byte personnel. There was even an expansion to Settlers 2 produced by Funatics called "Settlers 2 - Rise of Cultures" released in 2008. It doesn't feel like a long-shot to claim that the Settlers-series worked as a heavy influencer to the Cultures-series. Maybe someone had ideas that weren't realized in the Settlers series and decided to explore them themselves?

Because there are some notable differences between the series. While the Settlers series (at least the ones I have played) focuses on the gathering of resources for the building of structures, Cultures leans a lot more heavily on population management. In Settlers 2 any and all humans needed for a job just spawn out of nowhere like an endless resource. In Cultures, your people are a resource to be managed as well and the most crucial one by far.

In Cultures your men need to be born, told where to live, told which job to do, learn it well over time (or go to school and learn it well a bit faster), get a wife, have children with her and the new child continues the loop. The women on the other hand need to be born, marry, have children and cook for their family. You can imagine the big sigh I let out when I realized this. I decided to not let it ruin my fun however.

Every person (and they all have their own names) in your little settlement needs food but not all people create food, meaning there is an important tactical choice every time you choose to give someone a more secondary useful job like shoemaker rather than a huntsman. Will the rest of the population be able to sustain this shoemaker? Maybe they will all walk a bit faster because of their new and improves shoes which will increase food-production over time (I am actually not entire sure what shoes do to improve the population). Where should my new Huntsman work and will the women be able to reach his tent fast enough to be able to cook for their families? It is just the right amount of annoying when you see an alert that someone is going around hungry, when you know one of your Fishermen Huts is filled with fish.

Because so much focus has been put on the population management in Cultures, some other things have been made considerably easier. For instance, unlike in Settlers 2, most resources in Cultures seem to last either forever or at least way longer. Hunters don't seem to be able to run out of wildlife to kill nor can the fishermen overfish their waters. Once you've assigned someone to their job they seem to be able to go at it forever, giving you all the time you need to manage your people, right?

The controls are easy to grasp, especially if you have previous knowledge of this genre, and it didn't take me too long to figure out roughly how I needed to move along to keep everyone happy. Knowing and doing are two different things however, and I find myself tweaking my micro-managing in just the same fun ways I did with Settlers 2. Every now and then the game throws a wrench in my works, like someone not being able to pathfind their way back to their home (working as intended) or me realizing that in my eagerness to create men that work the fields I've not birthed enough women that do the hidden work, slowly making my civilization crash before my eyes (almost an apt political statement from the creators).

Just like Settlers 2 this proves to be an incredibly more-ish concept. It is very satisfying to try to figure out the balance between your resources and making sure not to tip the scale the wrong way. It is fun to realize that by trying to solve a problem by adding a new worker I just actually added to my problems. When I look down on my little settlement and see everyone working like little cogs in a machinery, I'm almost afraid to add any little thing to it, lest it sets off a cascade of issues. Problem-solving these kind of issues has always been one of the things that have attracted me to the genre.

Because Cultures is about the lives of people it is slow work though. I haven't checked if this game has a "speed-up"-button like Settlers 2 (I some times played entire sittings with speed-up activated), but in either case you've got to be prepared for a whole lot of leaning back in your chair and read a good book while waiting for things to happen. One of the most common occurring themes in reviews for this game was how slow it was, and I can definitely agree with that. But not in a bad way and never to the point where it gets boring. A lot of these city-building games, and maybe it was something about the times they were made as well, are designed in the way where you set up an amount of orders, wait for it to happen and then reap/repair accordingly. Set up your next amount of orders, rinse and repeat over and over.

Even if waiting for someone to grow up so that you finally can get that really needed Merchant can sound like the dullest concept for a game, and despite what I just claimed above, in reality you're rarely absolutely out of things to do. If nothing else there is still a lot of thinking to do, about things you are going to have to do, about things that look like they might not work for much longer and are going to need fixing etc.

That is the charm with these kind of games and as much as Settlers 2 made me love it for it, Cultures is doing a great job in capturing the same essence with a similar but quite different take on it. Part of the appeal here is the meditative state they put me in and things just kind of trudging along and the world around you disappears. It's not stressful, and extremely rewarding when you get things right.

My 8 year old brother had no interest in Settlers 2, but my 8 year old at home showed great interest in Cultures. After having tried it for a while on his own though he seemed to think things didn't go so well and we decided it would be the most fun to play together. And any game that can get a modern kid away from Minecraft is at least doing something right.