I am going to say straight off the bat that I am probably doing you a disservice by saying that I didn't end up hating this show. After having read the initial impressions I went in with extremely low expectations, and now that I've seen it I am a bit worried that it might be a prerequisite for not getting massively disappointed. Ok, off to a confused start? Good, that's as it should be when it comes to Resident Evil.

I am a pretty big Resident Evil fan. It started with the Remake actually, which got me to love the original. It lost me around RE4, I am quite old-school in how I want my zombies and my action. I loved the first Resident Evil movie with Milla Jovovich, the later once less but they're at least close enough to be somewhat entertaining. I liked the animated movies Degeneration, Damnation and Vendetta (haven't seen Infinite Darkness yet) and thought that the Netflix TV-series could at least have the potential to add something to the world of RE.

It seems most people didn't like it. It has got a pretty abysmal 3.9 on IMDB when writing this. I haven't dug too much around to see why that is. But it seems easily summed up in words like "disappointing" and "annoying".

I like to start with the bad, that way I can end with the good (where there is some). My biggest issue with RE Netflix is that it really ends up being two shows, and they don't mash particularly well. On the one side you have a (bad) teen-angst-drama. The show centers around sisters Jade and Billie who move to New Raccoon City and a lot of the show is about how they deal with feeling like outsiders. The other side of the show is about how their father (Wesker) might be insane and why the company he works for is so mysterious. It's easy to see the problems this show faces, because it can't decide which of these two story-lines to focus on. One of them is boring as nails, I'll give you one guess which one that is. The other one is a pretty decent take on the RE universe that I had fun watching.

I almost get the feeling that there was a team of actual RE fans trying to make a good show and execs came in and ruined it by trying to fit it into some hip demographic. Unfortunately I think the part of the hardcore RE fans that are also teenage girls who think no one understands them is very small. Why were they worried about making it just about RE?

The choice in music is among the worst I have ever come across in television. If a scene is about Jade trying to figure out how she should support her sister Billie, a song comes on with someone singing something along the lines of "ohh, if I only knew what she was thinking of. Maybe I can help heeeeer?". If Billie is getting angry with her sister for showing boys more attention than her a song comes on singing "why can't she see meeeeee? If only I could make her understaaaaand". I am only slightly exaggerating. They must've literally done a word search on the dialogue to try to get song that fit, because they are excruciatingly on the nose. And why are these scenes that exist in a show about RE?

The whole thing about Jade and Billie is not just beyond boring, it's also pretty much useless even as a plot device. If they were completely cut out of the story it would've barely made a difference, other than make this show a hell of a lot better. I almost feel sorry for the two actors playing young Jade and Billie, because it is not their fault that they've been put in a show where no one wants them.

The show also follows two timelines. One of the mentioned young Jade and Billie as nervous teenagers and one as Jade as an adult where the world is already overrun by zombies. One can see it as one timeline taking place in the first Jovovich movie and the other in the last Jovovich movie. There are some plot twists, most of which are not particularly twisty, one which is halfway through the show and is absolutely amazingly twisty and actually had me sit up in my chair going "this is the RE I love!".

Lance Reddick, who plays Wesker, is probably the best thing about this show. Paula Núñez who plays Evelyn Marcus, the shows iteration of the crazy owner of Umbrella is also pretty spot on. If the show was only about these two it would've nailed a lot of RE (and zombie) tropes that we know and love; gigantic zombie animals, check. Someone getting murdered by a zombified family member, check. A lunatic trying to save the world by watching it burn, check. People making really poor decisions, check. Science doing things science can't do, check.

I really did have fun with this part. I suffered through the teen-angst for this part. Someone did a cut of Obi-wan that cut out all the stupid scenes. Something similar could possibly be done with this show, and it would be half as long. The show ends abruptly, at first I didn't realize I had finished it and was looking for the next episode. But there is a lot of good material here, some interesting and fun RE ideas. Maybe the most disappointing part is that they had to be forced to wallow around in a show that is nothing about RE. 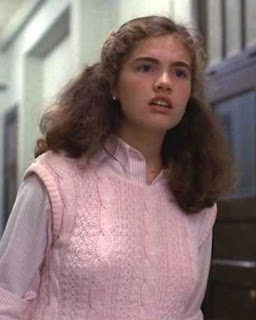 Tamara Smart, who plays young Jade, looks and acts so much like Heather Langenkamp (Nancy) from Nightmare on Elm Street. Look at them and tell me I am wrong.

There are quite a few references to the game series scattered throughout the show. Some are obvious, some are less so. It's fun to try and spot them.

Email ThisBlogThis!Share to TwitterShare to FacebookShare to Pinterest
Labels: Review