What makes a good metroidvania? Axiom Verge sure makes a very good stab at it and gets almost all the way for me.

Axiom Verge starts off promising. Your character handles well and the surroundings are great. It is clear that the Metroid series must've been a huge influence on AV not just in gameplay, but also in aesthetics. You'll run through similar off-world looking spacey half-creature-esque corridors and rooms with similar feeling and looking enemies.

The gameplay is pretty text-book metroidvania, the map even looks like something taken straight from the handheld Castlevanias. Not a problem for me, those games - like Circle of the Moon - are some of my absolute favorites and I am always on the lookout for something that can scratch the same itch since Konami doesn't seem interested in my money lately.

There is a huge arsenal of different weapons, some definitely more useful than others but there is some impressive inventiveness that's gone in to them. Your character also gains new skills along the way in true metroidvania fashion and I really have to give credit to these skills not always being what you expect. Running around the map you'll find areas where you think you need something like a high jump or flight ability, but in fact you get completely different and very fun to use skills, like a little drone. A lot of these skills also get built upon, where it does one thing when you first acquire it, it does several more things further into the game. 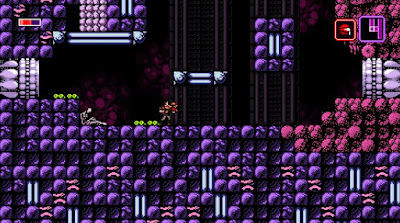 The game also does an amazing job at blending the game world with your skills in an original way. When you start the game you see areas that look glitched. At first I wasn't sure if I had a wonky copy or if it was supposed to look like that, but I soon found it was part of the level design. Your character gets a world altering gun that doesn't just change the feature of certain areas of the game, but also how most enemies behave. Using the gun to alter the world around you becomes key to getting around and it's used in a way I would love to see further explored in other games.

Acquiring new skills and discovering new things on the map goes at a fairly well balanced pace for most of the game. For the first 80% of the game I am having a blast getting through areas and trying out new skills on places I've had to leave behind before, just as it should be in this genre. There is a point however when I had discovered what I assume is the majority of the map and I start looking for those few points here and there where I might've missed something. While the map isn't huge, getting from one area to the other side of the map still requires a fair time of just running through places you've passed many times before. It is fortunate that there are few enemies that are really annoying or hold you up, but this time sink still puts a massive wet cloth on the enjoyment of exploration. When you die you get teleported back to the last place you saved, and I some times used that as a sort of "fake" teleportation to quickly get me back to an area if it turned out I had gone down a dead end.

Though the bosses are quite easy they are fun and a nice change of pace as you run around. I definitely wish there were more of them and maybe also more to them. While they generally have several phases, most of it is "hit the sweet spot until it dies". These bosses just look like they hold more potential. On the other hand, they're used as story telling devices and not just put in there for the sake of it.

While the story about you being a scientist who, in an experiment gone wrong, gets sent to an alternate reality/dimension/world to kill some mysterious enemy is a bit confusing and almost trying to be unnecessarily deep, it is still interesting and at least doesn't detract from the fun. The aesthetics with pulsating blobs and dead bodies lying around also add to the atmosphere, as does the music which is absolutely amazing. I never once tired of the tracks playing and the entire OST is definitely going into my "Great VGM" playlist.

The reward feedback loop teeters out significantly towards the end for me. This is a balance that all metroidvanias struggle with - what will entice the player to continue when there is little left to discover and a lot more time has to be invested to find it? This is especially true when I have very limited time to play in the first place, and I don't want to spend my precious evening game time on just running around looking for things. Maybe the early game spoils me too much, giving the endgame a hard time to keep the steam going?

The vast majority of the game is really fun though and well worth checking out if you're on the lookout for a metroidvania that manages to blend a classical style with some fresh ideas.

Email ThisBlogThis!Share to TwitterShare to FacebookShare to Pinterest
Labels: 2015, Review