Point and click adventure games have always been proof of my inner masochist. Why else would I keep trying these games when I know beforehand that I have little chance of getting through them "legitimately"? Nostalgia is probably the best answer. Watching my mom play games like The Dig, Myst, Riven and puzzler Safecracker as a kid are some of my best video game memories.

So paradoxically to me P&C games have simultaneously always been a sure way to failure and a sure way to comfort. I love them, but I honestly suck at them. I tell you this because in all fairness I am the last person who should ever review a P&C game. I probably can't give you much guidance on whether the core mechanic of the game, the puzzling, is well designed or not. I am bad at them either way! But maybe there are some things I can tell you about Primordia, I am definitely going to give it a try nonetheless. 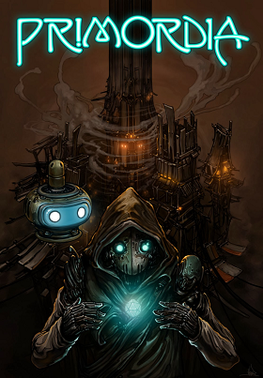 It all starts out when you, playing as the robot Horatio Nullbuilt, gets robbed of your ships power core by some seemingly random robot-brute who shoots you and leaves you to rust. Fortunately you're fine, and with your trusty sidekick Crispin in tow you set off to get back what is yours. Starting the game my first thought was "omg I love that voice. Who is that voice? Do I know that voice? I need to know who does that voice!". Horatio is voiced by Logan Cunningham, famous for doing a lot of voicework for Supergiant Games, like Bastion and Transistor (and more recently the very well received Hades). It's great, I love it and I could listen to Logan/Horatio all day long. Horatio has a master/buddy relationship with Crispin that reminded me a lot of the one between the Nameless One and Morte (also voiced by great voice actors!) in Planescape Torment. Crispin is sarcastic and witty and Horatio is always almost done with his sh*t. It works and it's funny. The part with a finger and a nostril had me giggle, I'm sorry but that is just my kind of humour.

Game mechanics in P&C games have come a long way from the Monkey Islands and Maniac Mansions of 30 years ago. Gone is the verb wall, now you just either look at something or act on it. This isn't something new so I won't delve too deep in to it, let's just say I am very happy for it as I feel it allows for a lot more focus on the puzzles themselves.

So to the puzzles then, let's give it a shot. Of course I had to use a walkthrough for some parts of the game, but surprisingly few for being me. Primordia does a great job at putting puzzles in front of you that will make you feel smart when you get them, but never angry because you fail. Reading a walkthrough when playing P&C games I some times think "ah I would've never gotten that one anyway". Never with Primordia, every time I realized my problem was that I had forgotten about some information I had received earlier in the game or a location I had visited earlier in the game. I wish I had written stuff down sooner! No puzzle was annoying and I really enjoyed cracking the 16 digit code towards the end. There is a surprising amount of what seems like Red Herrings too, having me try to break codes with the help of a random shopping list for instance and spending way too much time with the Sad Robot. Either that or I just missed a lot of content. I didn't mind this either, the solution to a puzzle always ended up feeling clear, and my problem was paying attention.

The story of course escalates quickly from "trying to get my thing back" to something like "trying to find out what actually happened with humankind and saving robotkind". The post-apocalyptic sci-fi setting is right up my alley and you get just enough tidbits of information about the world around you to get a comprehensive idea and yet know absolutely nothing about anything. What happened to the humans? Who is Horatio really? Why did they take his power core?! Funny thing is, I again see similarities to Planescape Torment, where people you meet some times seem to know more about you than you do and you have in fact existed in several versions before this one (which is information you get from the start but don't think about until later). The game sort of sets up for plot twists without particularly delivering any, but I like that. This time we don't get to peek behind the curtain but we're left with questions and curiosity for more. That way the characters manage to stay in my mind for longer after I turn off the game.

The game might be fifty shades of brown but the pixels have a lot of charm. The environments do their job at conveying dereliction without getting me lost or confused. I only once had trouble locating something important in a screen and that one was definitely on me. The character designs are as varied as their personalities. You'll meet robots in dispute over guardianship, robots who rhyme, robots who wait for buses... The background music is suitably ambient and also apparently impossible to find on Youtube unfortunately. You can get it on composer Nathaniel Chambers Bandcamp though.

It's not a long game. With some help from my internet friends I finished it at just over 6 hours. I can't decide if I wish there was more or think that actually, that just means it doesn't outstay its welcome. I am definitely more curious about the world and the characters, but the game keeps the puzzling tight with rare need to run all over clicking everything and trying to combine anything with something, which I think is where a lot of P&C games bloat their game time, at least when I play them. Getting around the map is super quick and easy, the game helps you keep notes on some essential information and the puzzling is as logical as it is going to get in these kind of games. If you like P&C games there is really no reason not to try this out - come for the puzzles, stay for the story and characters. You won't be disappointed.