The Mystery of the Pokémon Cards

I am something of a flea-market and second hand store addict. While I haven't really done any huge bargains or found any long lost artworks I almost always find something fun or interesting. Like the Turtles board game or a bunch of the Mighty Max playsets.

A while back I found a nice looking Pokémon folder and since I was actually on the lookout for one and it only cost 40 kronor (ca 4 euro) I decided to buy it. After a quick glance in it I noticed that it was actually full of Pokémon cards, which was a nice addition and especially for that price. A closer look and I realized that every single card was a rare foil card - all of them were EX. Roughly 100 of them in fact.

I was flabbergasted. I wasn't sure what to do. Return to the lady who had sold it and explain to her that she must've surely sold the very hard and expensive labor of her child by mistake?

By the time I had realized the extent of the rare cards in the folder I was already back home and curiosity and laziness made me decide to keep it. (Maybe also greediness? While I knew I was unlikely to sell them, I rarely sell stuff, it's always fun and cool to own something that's somewhat valuable). 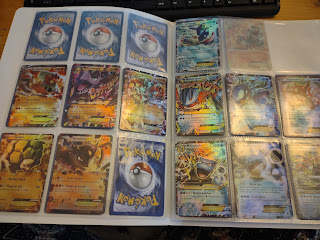 I showed them to my family and we were all excited together. We started to really pick through the cards and give them a thorough look. They looked so pretty, so shiny... and also after a while I thought they looked somewhat... odd. 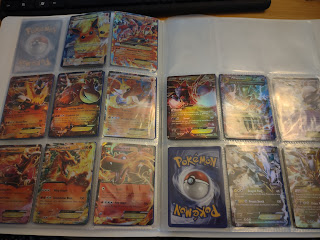 For instance, I noticed that when compared to other foil cards in my collection they looked considerably darker and harder to read. There was something off about the foil quality of these particular cards. Even though it was very good, it was definitely different. Once I started to get suspicious I quickly noticed a few other discrepancies when comparing them to cards I knew for a fact had come out of a booster pack. All the shiny cards in the folder had a little bump along the edge of the rim, like it had been attached to a bigger piece of card at some point rather than cut out smoothly like original Pokémon cards seem to be crafted (little bump too tiny to be pictured with my phone camera). Also the folder-cards were noticeably stiffer, even when compared to other full-foil cards.

Not long after I had come home with the folder it was decided, every card in it was fake. And what fakes they were! I have come across Pokémon fakes before, and every time it has been extremely obvious that they had been tampered with. And it was fairly obvious with these cards as well, especially once you took them out into the light and held them in your hands. But even then, the pictures with their shiny foil must've been hard to make I imagine and the cards surely neither easy nor cheap to produce?

In a way I was happy they were fake. I didn't feel like I had tricked some nice lady at a flea-market. None of us liked them any less and I could let my kids play with them without being worried they'd rip 10 euros worth of card in half. Since we only play each other we can decide whether we should allow them in a deck or not which still means we got 100 really nice and cool new cards to play with.

And it still stands as one of the most interesting finds I have made at a flea market, because I still wonder how someone went about making these.

Email ThisBlogThis!Share to TwitterShare to FacebookShare to Pinterest
Labels: Pokémon